Seeing the Potential in Seaweed

An article from the news.

Seeing the Potential in Seaweed 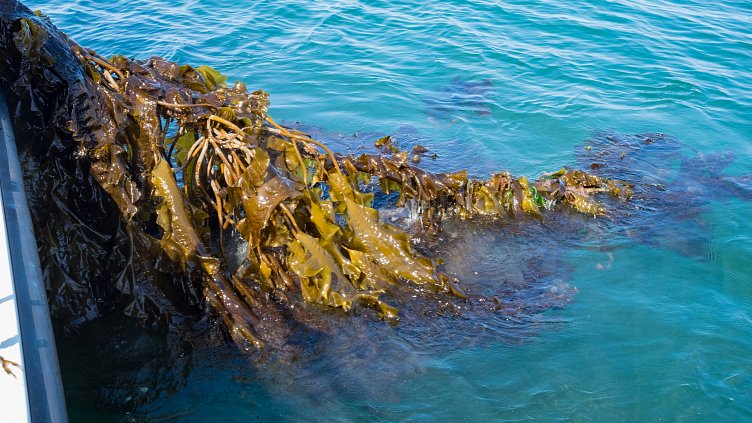 Seaweed. Chances are this word probably conjures up one of two images in your mind: slimy, slightly rotten smelling beach debris, or a crispy Chinese takeaway dish. You probably wouldn’t think of seaweed as a commodity that could potentially give oil a run for its money. And yet a significant amount of media attention, funding, and research and development investigation time is being thrown at this slippery sea vegetable due to the transformative role it could play in generating green energy and capturing carbon. So what can you really do with seaweed? And what potential risks, issues, or barriers might there be to reaping its benefits?

According to a report by the Government’s Centre for Environment, Fisheries and Aquaculture Science department (CEFAS), in the years between 2000 and 2014, global seaweed production more than doubled from 10.5 to 28.4 million tonnes. Whilst we in the West may have been slow to cotton on to all that seaweed has to offer, in Asia seaweed is already big business, with the continent dominating 96.6% of global production, a figure that dwarfs Europe’s 1%. China and Indonesia have the largest global markets for seaweed production, with China alone accounting for 50.8% of production.

In the UK, seaweed is currently used in animal feed and dietary supplements, but is becoming increasingly popular as a food in its own right within the trendy “superfood” market due to a high protein content, abundance of minerals such as calcium and iron, and levels of vitamin C to top that of an orange. Seaweed also makes an excellent fertiliser and flavour enhancer, and appears in many chemicals, including hydrocolloids, where it acts as a thickener or gum.

However the UK is only just beginning to realise the most exciting potential application for seaweed; as a feedstock for the production of sustainable energy by anaerobic digestion (AD). CPI is leading an Innovate UK funded multi-party research and development project entitled SeaGas, the main focus of which is the development of a viable AD process for generating renewable energy. Queen’s University Belfast, The University of Newcastle, and CEFAS are also involved in the project, as well The Scottish Association of Marine Science (SAMS), which is carrying out extensive work in seaweed cultivation at its pilot farm.

AD processes traditionally use crops such as maize and beet as well as agricultural and food wastes, however seaweed is a more sustainable source of biomass as it does not require fertiliser, fresh water, or agricultural land for production. Over coming years these resources will become increasingly scarce and better used to produce food for human consumption, so the short term identification of energy feedstocks which do not require these precious resources is important. Seaweeds also boast high productivity, fast growth rates and high polysaccharide content; all important qualities for biofuel biomass.

Seaweed farms could be used to absorb CO2 very efficiently, with research suggesting that if seaweed farms covered 9% of the ocean they could produce enough biomethane to replace all of today’s needs in fossil fuel energy, while removing 53 gigatonnes of CO2 (about the same as all current human emissions) per year from the atmosphere. Sustainable fish production could also benefit from an increase in seaweed, with the potential to provide an additional 200kg per year, per person, for 10 billion people, as well as a reduction in ocean acidification and improved biodiversity.

Our extensive coastline means increased seaweed production could be achieved in the UK through the introduction of farming. Speaking on BBC Radio 4’s Today program earlier this month, Elizabeth Cottier Cook of SAMS described how, during a visit to a seaweed farm in Oban as part of a global seaweed workshop funded by the Natural Environment Research Council, a Korean professor had exclaimed that he could not understand why the UK’s beaches are not covered in seaweed farms, as the pristine waters and conditions are perfectly ready to host a seaweed industry. The SeaGas project is investigating what the environmental impact of this would be to determine the level of sustainable farming which is possible, and identify the levels of existing stocks of wild seaweed.

Clearly the supply chain for seaweed production will need to be investigated and developed further before the UK can start to implement seaweed focused energy generation or carbon capture strategies, but there are further barriers that must be overcome to make this vision a reality. In a recent report, SAMS warned that action must be taken to ensure that the industry does not grow too fast in order to avoid the risk of disease and resultant crop failure due to the transfer around the world of different species without any biosecurity measures being in place. The report aims to encourage the industry to start to find a solution to this issue.

Additionally, there is currently no legislative or regulatory framework in place for the production of seaweed. The lack of information on the potential environmental impact of seaweed farms and their management means regulators are unclear on how to interpret requirements under national and international law, which has the potential to hold up seaweed production. The SeaGas project will attempt to redress this by reviewing and reporting on the current legislation and licensing processes.

So what value will we attach to seaweed in five years time? Once the results of the SeaGas project have been disseminated, the UK’s existing stocks and farming potential are understood, and the legislative framework is further developed, we will be in a better place to make an educated analysis. However if we are to exploit this interesting aquatic plant to its full potential, knowledge transfer between research and industry, of the kind exemplified by the SeaGas project, and the development of algal-business clusters, will be invaluable.